Guangdong and UK to have closer trade and investment tie

Yesterday, as the Chinese leaders in Beijing were putting their final touch on the blueprint for further market reform and opening up, over two hundred British and Chinese companies and organisations were meeting to further the cooperation between UK and Guangdong Province, the largest and most prosperous province in China.

More than 130 UK participants travelled from all over the UK to capitalise the multi-sector networking event which featured market update presentations from prominent economic and government speakers and key companies from Guangdong and Macao.

British companies are encouraged to take opportunities to work with Guangdong by Dr Kegang Wu, Executive Director of BCC LinkToChina which co-organised the seminar with Thames Valley Chamber of Commerce with the support of the Chinese Embassy, strategic partners of LinkToChina and other trade organisations in the UK.

Guangdong imported from the UK around £1 billion and exported to the UK around £5.7 billion during the first 9 months this year. As reported by LinkToChina, many Chinese hi-tech companies invested in London Thames Valley, such as Hytera, Huawei, ZTE, and TPLink, are from Guangdong.

Mr. Huiwu Li, Deputy Director General of the Development Research Centre of the government, who spoke for the 80+ strong Guangdong delegation with impressive economic data of Guangdong: 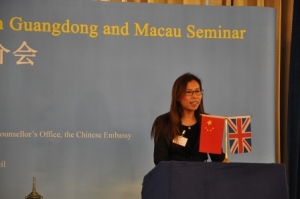 “Guangdong companies will be supported by the government to invest in the UK if they are ready”.

“Guangdong will strengthen its effort to attract British companies to work with Guangdong in service outsourcing, IT, biotechnology and pharmaceutical, service industries, modern agriculture and advanced mechanical engineering,” he said.

One British businessman, who is experienced with China, said “It was fascinating to hear about the region; which I have not visited yet as most of my time was spent in Hong Kong and Shanghai”.

Another UK participant, Jenny Hogan, who is the Managing Director of a Thames Valley firm, was pleased: “I met some extremely interesting people and thought the speakers were excellent, providing much thought provoking information, I certainly look forward to doing business in China in the future.”
The seminar was chaired by Ruth Bagley and Tim Wheadon, respectively Chief Executive Officers of Slough and Bracknell Forest Councils, two of the councils that are leading the London Thames Valley’s cooperation with Guangdong.
Echo Chan, Executive Director of Macao Trade and Investment Promotion Institute impressed the audience with the great achievement of Macao’s tourism industries and its ambiguous plan in working with Guangdong’s city of Zhuhai in the Hengqin Isle development.
The lead group of the Guangdong delegation earlier on the day attended a Guangdong – London Thames Valley Round-table Meeting with the strategic partners of LinkToChina.

This site uses Akismet to reduce spam. Learn how your comment data is processed.